The latest issue of Jump introduces the different types of dragons in Tales of Zestiria.

The dragons of legend, much like the Hyouma beings, are not visible to normal humans. The scans introduces two types of dragons: Dragon Puppy ( not sure on the spelling, ???????, doragon papii ) and Dragonewt ( ???????, doragonyuuto ).

The Dragon Puppy... doesn't really look like a small dragon from the scans, so I'm not sure on our romanization. Maybe when better scans come out.

The Dragonewt seems to be able to wield weapons and fight like a human.

This info on dragons is apparently also on the latest Famitsu issue, but we don't have scans yet.
Tales of Zestiria will be released in Japan on January 22, 2015, and in North America and Europe sometime in the future. Pre-orders are now available at the following shops:
About a745 1693 Articles
A745 (or Abby, as most people call her) is the founder of Abyssal Chronicles. She is currently a doctor, but that doesn't stop her from showing her love for the Tales of Series. She loves potato chips. A lot.
Contact: Website Facebook Twitter YouTube 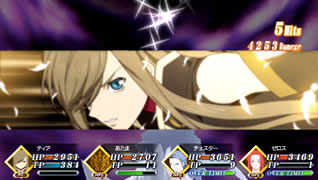 Tales of Zestiria PS3 and PS4 Collector's Editions and Pre-order Bonuses For Steam Announced For Europe!